So I've been gone for awhile and part of the reason is these new shirts. I have been designing, adjusting, adding, photographing and messing with these shirts for weeks.

Here is a photo of the most recent incarnation: It is like a shirt, but also like a dress. Here is Zoe wearing it at the Spring Pugnic. Everything she wears looks good, but I am pretty impressed with the shirt — finally!

In a few weeks we will be offering the collar to match this shirt. That turned out way cute too. I don't have a great photo of Zack in his alphabet shirt, but you can kinda see how handsome he looked in this photo. That pug behind him, I almost stole that guy. He was the cutest! And he had just undergone plastic surgery to remove some of his face wrinkles because he was getting infections. He was going around telling everyone that he had a little freshening up done for the Pugnic. Either way, he was the cutest! 😉

Back to the shirts– I am not sure that I am describing them well. I call the letter shirt the Alphabet Shirt, but really it is the Initial Shirt since the customer chooses the dogs first initial for us to sew on. I think people don't know that they choose the letter! What do you think?

You can get this beautiful shirt here.

I don't know how it happened, but I haven't written a post in a month!

So much has happened since then, so I will give you a quick photo essay to explain my absence.

First, the super awesome Paws on the Run placed a HUGE order with us! I was sewing sewing sewing and then suddenly it was Nov. 12 — time to go to Mexico! Here we are riding horses on the beach in Cabo San Lucas.  I would have had a better time if I hadn't missed my boys so much.

We came home after a week and I had to sew like a crazy woman once again! Got the order out in the nick of time since my order board was starting to overflow! Then Auggie put jelly all over his belly.  (No this isn't Dan, it is Auggie. I know it looks EXACTLY like Dan but I know my own child and this is him. It is a good thing my husband is the most handsome man in the world, eh? I am tempted to have another baby just to see if it comes out looking like a clone of myself. It would only be fair.) Sometimes the things this guy thinks are a good idea scare me. You've seen him eat coffee grinds, eat the dirt from plants, now jelly on the belly. I have my hands full, oh boy.

In my downtime I was surfing the net and read about this poor old, fat, black pug who had been dumped on the side of the highway and had no home. He was sleeping in the shelter, which although very nice, is still a shelter and kind of scary for dogs.  Dan owed me one for a stupid thing he did (no, I don't have pictures of that;)  ) so I was able to convince him to let us bring this little guy home just until he gets adopted. Isn't he sweet? The name the rescue gave him is Rajah, which I love, but he won't answer to it. He does, however, answer to Harpo and Pug. And trust me, I must have called him a thousand names before he descided which he liked.

He has been such an awesome guy. I am just dying to find him a new owner.

And then there has been Christmas orders for Mimi Green. More on that tomorrow!

Lastly, I got the best Pottery Barn knock off desk I have ever seen for my studio. I was gifted some money for my birthday and I figured I owed it to myself to make my work space nicer since I practlcally live in there! I am so loving the shelves below it. And the room! I can actually put more than just my computer on my desk now. Plus, you might have noticed that I have shelves under my table now.  We moved the sawhorses out, which were genius but served no purpose, and replaced them with shelving to hold all my webbing supplies. Another idea I stole from Pottery Barn, only their table like this costs $1000. And Cessie loves were her bed sits now — Right in the sun!

Where did I get this desk awesomeness? You might of heard of it, it is a very exclusive little shop called Targ'et Boutique. And last week they had free shipping and 15% off.  What a very happy early birthday present to me huh!?!?

I had an itch to sew last night. Thankfully, my pug is very appreciative. And then I had the urge to embroider. Good thing I had fabric and stuffing to make this bed or my husband may have ended up with his name sewed on all of his pairs of underwear.

I see some things that I could have done differently, but at 11pm, this was all I had in me. I got the instructions here from Lori Marie at little pretty things.

And little Cecilia, well she has never been so happy. Next time , a  doggie coat.

I have wanted a pug since I can remember. When we were trying to decide if it was time for a new baby I told Dan that it was a dog or a baby. I had it in my head that I wanted to either cuddle a baby or a wrinkly little pug. Dan made us get a black Lab. Needless to say, we had a baby.

Auggie turned 6 months on Wednesday and I still wanted a pug. I should have just told Dan that I wanted a baby AND a pug, but after talking to NM pug rescue, I found out that it wasn’t too late.

Meet Cecelia Miller. We are calling her Cessie. Oh, she makes Auggie so happy. Well, she isn’t ours to keep, we are just fostering her for the rescue who right now has 14 pugs in need of a home.  I met up with the NM Pug organizer, Kelly, yesterday at NM Animal Humane and got to take this baby girl home after she had surgery to remove a growth on her arm

You wouldn’t even know that she was cut into yesterday, she is so happy to be here and has already made herself at home. Me, well, I am gonna have a hard time giving her back to be put up for adoption. She is already sporting a Mimi Green original design… I made her this collar this morning and was going to embroider her name on it until I realized that her new owners might change it. I want her to take this with her so she can remember her foster momma. Plus I think the beautiful blue buttons will make her feel better from her surgery, along with the blue striped bed and baby blue leash that I bought her yesterday. I also bought an insane amout of treats, Chicken Soup for the Dog’s Soul canned food, and Paul Newman peanut butter pieces. Noah says that I am going to spoil her.
What is sad is that her daughter was picking on her at the rescue and from the looks of her apparently not letting her eat or drink. Good thing our lab, Etta, is being very generous. You can see her stitches in this one, they aren’t pretty. Poor girl.

Sewing the collar was super simple. I will be putting up a tutorial for it soon, I think I’ll make one for each one of the pugs at NM Pug Rescue.  Click here for the link to them, but don’t  blame me if you instantly fall in love. 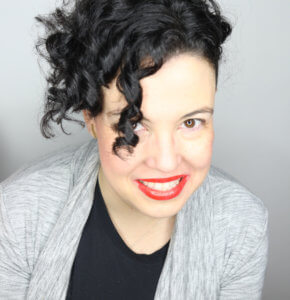